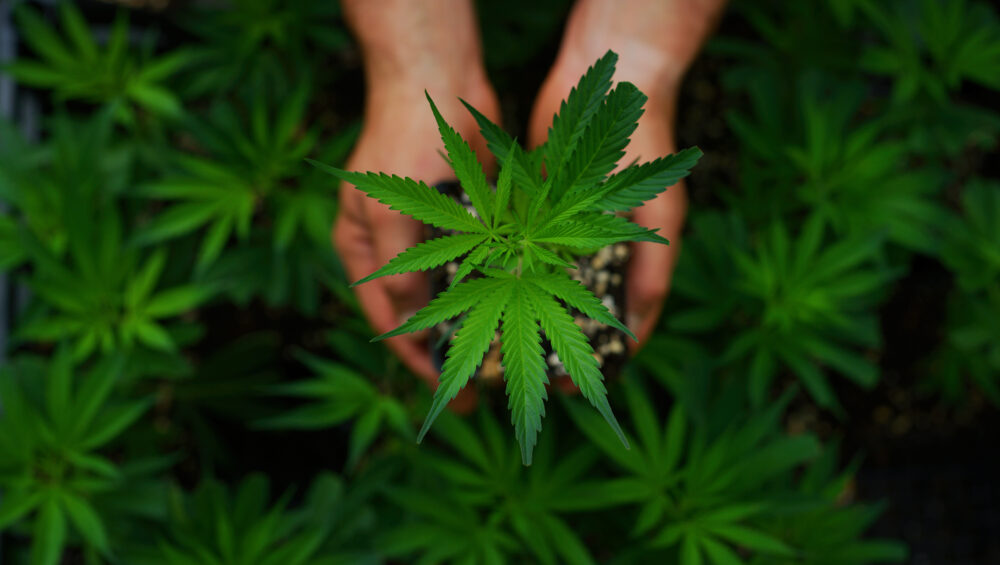 Hemp and marijuana ARE NOT the same, they are simply apart of the cannabis family and, in effect, have similar appearances.

The continuous confusion between the two can be pinpointed to political leaders who grouped all cannabis species as a Schedule I Drug in 1970. For nearly four decades, public perception of these plants was based on this proposition.

However, marijuana and hemp have a number of different aspects to easily separate them. Within this article, we look into these differences and give you a clearer image of what hemp and marijuana truly are on an individual level. 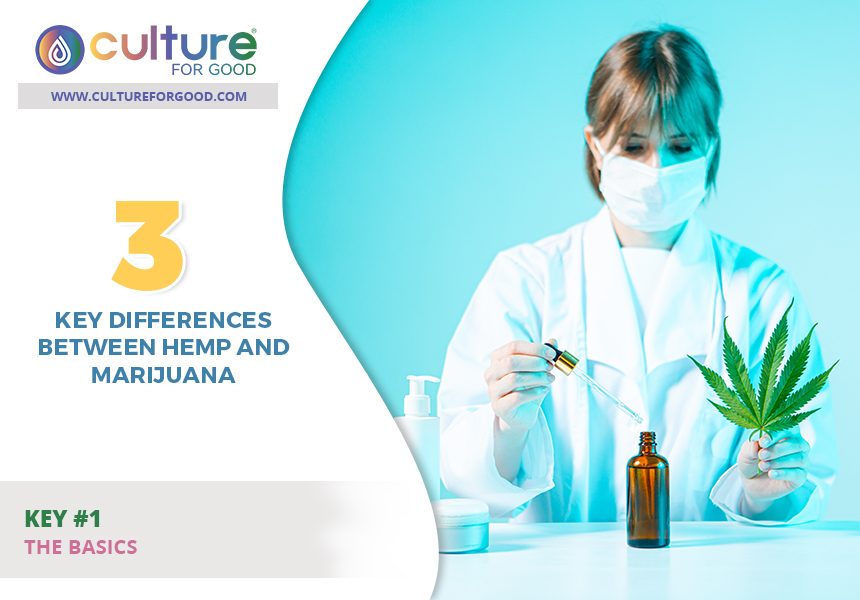 For an immediate idea of how the two plants differ, we’ll discuss the basic differences.⁷

Hemp has less than .3% THC count, is not a psychoactive, and it is adaptable and requires little care. On the other hand, marijuana has between 5% and 35% THC count and is a psychoactive. It also requires a lot of care and proper techniques. Hemp is used for many things, with concrete, fabric, food, and plastic being just a few of them. Marijuana is exclusively a medical and recreational drug. 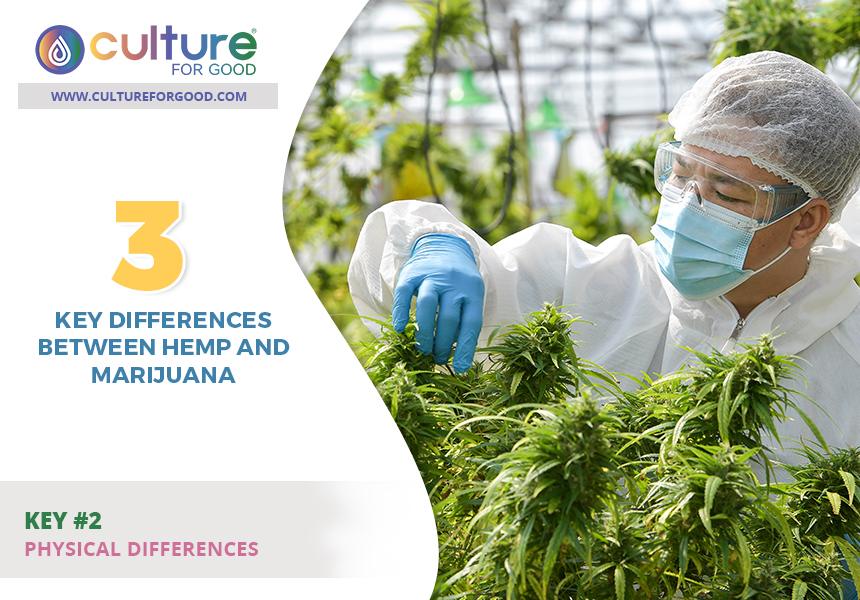 Many people continue to confuse marijuana and hemp simply from their appearance. Though they do have similar characteristics, a quick observation reveals they also have a lot of differences².

Marijuana tends to have:

Hemp tends to have:

These differences are most noticeable if you were to attempt to grow the two. Hemp tends to grow closer together and is produced in multi-acre plots. Its cultivation timeframe is around 108 to 120 days and can be harvested in diverse climates.

Marijuana plants, on the other hand, tend to be grown further apart due to their short and bushy size. It takes around 60 to 90 days for marijuana to fully mature and is difficult to grow unless in a warm and humid climate. 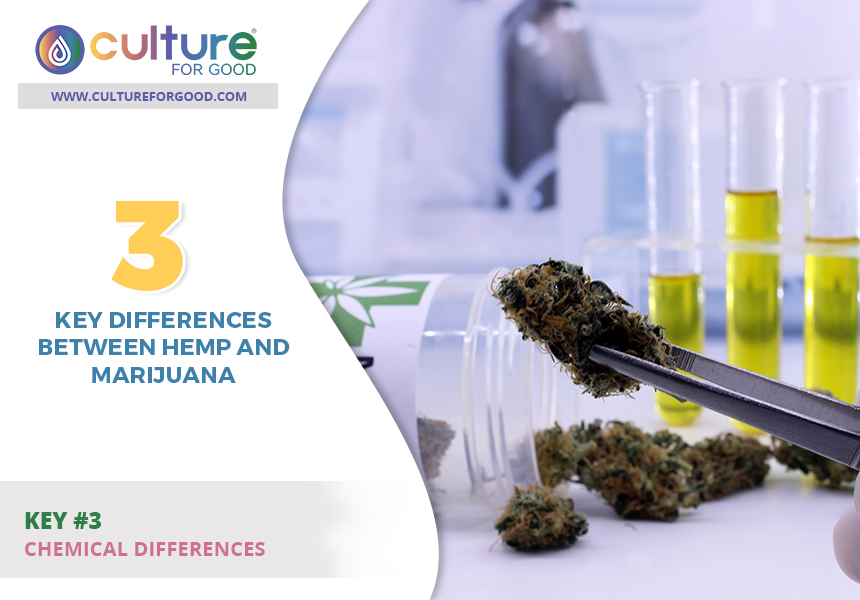 The most notable difference between hemp and marijuana is their chemical makeup. Marijuana contains tetrahydrocannabinol (THC) which causes psychoactivity in the brain and often leaves people feeling high³.

Hemp contains such a small amount of THC (less than 0.3%), it doesn’t cause this psychoactive reaction. Instead, it contains another cannabinoid known as cannabidiol (CBD).

THC and CBD are so different that CBD actually has the ability to counteract the effects of THC.

To offer you a better understanding, THC will:

While CBD can be: 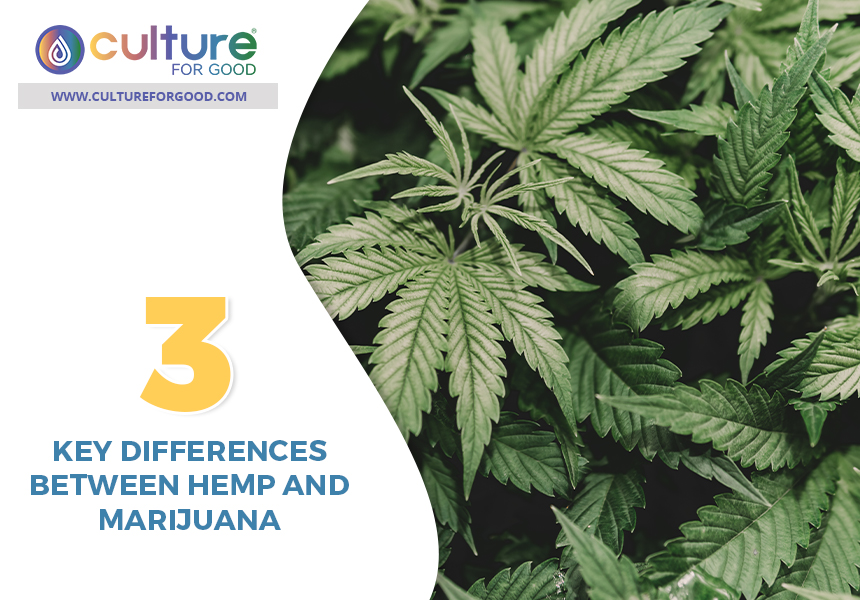 It’s important to note that this article discussed simply the basics differences between hemp and marijuana. Truly, you could write an entire book on the variety of dissimilarities these plants have. So much so, scientists don’t even know all the ways in which hemp and marijuana differentiate.

The reason this article remains simple is for the sake of sharing information. Much of the public is still unaware of the differences between hemp and marijuana and still perceive them as the same. With that, it’s important for us to educate and allow people to develop a better understanding of these plants.

¹ PLOS One: The Genetic Structure of Marijuana and Hemp